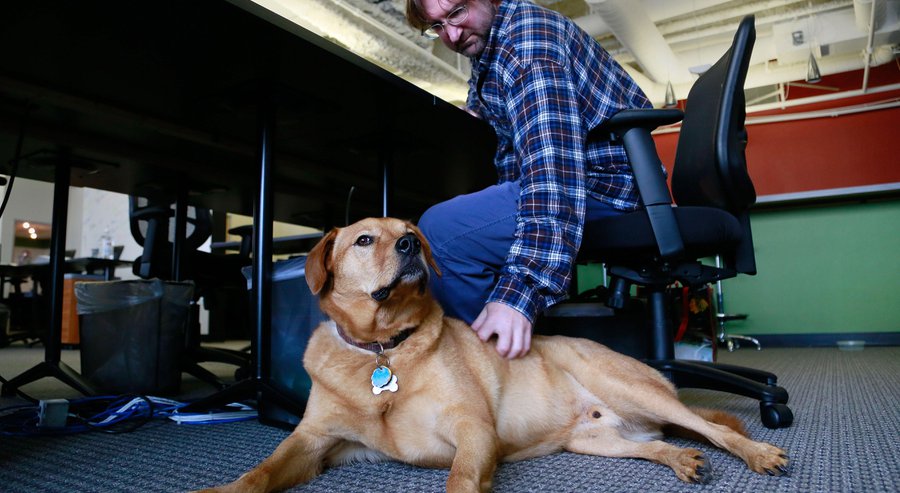 SAN DIEGO — Downtown is going to the dogs.

Not only does every other resident seem to have a dog, but now a major downtown high-rise office owner also is declaring one of its buildings pro-pet. 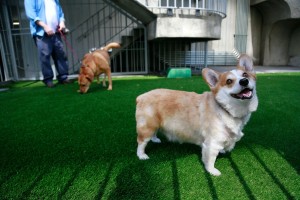 Emmes Realty Services has established its own “Bark Park” in the breezeway between the parking garage and its 707 Broadway building. Tenants are allowed to bring cats and dogs to work if they sign a form that lays out the rules and regulations. And a new deli opening next week, Nosh Express, plans to stock pet treats. This may be San Diego’s first high-rise with an official dog-friendly policy.

“It’s one of the many amenities that the more innovative, millennial-focused firms are looking at as a benefit for their employees,” said Emmes vice president Jordan Johnson.
He said several other companies are moving in, partly because of the new policy.

“One of the dogs may be a company mascot, an integral part of the team, and allowing that in the building is helpful to their culture,” Johnson said.

However, the policy is not planned to be extended to Emmes’ three other high-rises downtown; 1 and 2 Columbia Place at Columbia and West B streets, and 710 B Street. It also doesn’t apply to other pets, like snakes and gerbils, at least not yet.

The thinking is that employees who spend half their lives at the office, coding and designing on the computer, will stay longer if they don’t have to rush home to feed Fido or take him for a walk.

At the game developer Psyonix on the 16th floor, about six of the 80 employees regularly bring dogs to work.

“It has an overall positive effect, especially on the dog owner,” said Thomas Silloway, 30, director of development.

But he leaves his black lab Sparky at home when he has serious meetings with clients.

“I don’t want him interrupting me,” Silloway said. 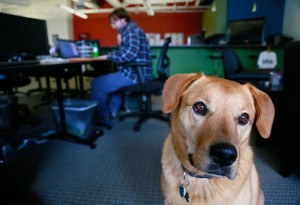 A friendly Corgi named Gary (named after actor Gary Busey) spends most of the day on the floor next to his owner, Dallas Hayes, 28.

“I think it’s great,” Stevens said. “The employees really like having the dogs around. It gives them a little break.”

However, some days he leaves Toby home alone.

“The first time I left him he gave me a little guilt,” Stevens said.

Dogs in offices is not new. Pet Sitters International started Take Your Dog to Work Day in 1996 in Britain and launched it in the U.S. three years later. (It’s scheduled for June 24 this year.) Allen Matkins attorney Erin Murphy in Los Angeles penned a set of guidelines for landlords in 2009.

But she said landlords are concerned about liability, insurance problems, maintenance and damage issues that arise if dogs don’t behave. Her company, Providien Property Management, enforces a strict no-pet policy.

“People try to bring their dogs but, sorry, they’re not allowed,” Hulbert said.

(A sign on the front door at the Union-Tribune building in Mission Valley reads, “Assistance dogs only.”)

The Emmes pet policy requires animals to be “fully vaccinated and well-trained.” They have to be kept on leashes in common areas and be removed upon the landlord’s request.

“Pets of a vicious or dangerous disposition — i.e. pit bulls — shall not be permitted,” the policy says.

“Not every dog wants to chase cats, but a lot do,” Ooms said.

Kris Michell, president and CEO of the Downtown San Diego Partnership business group, has a poodle mix that her landlord does not allow her to bring to work. But she would welcome the trend. She said the 707 Broadway Building may be the first local, multi-tenant tower with a pro-dog policy, and several others are looking into the concept.

“When you bring a pet into the office, it really calms everyone down,” Michell said. “Emmes is so smart to do this.”

But as millennials get married and have children, Michell predicted the pressure will be on to become kid friendly, too.

“All the building owners are looking at this,” she said. “Amenity-rich buildings are the key. … Pet-friendly places are really the beginning.”