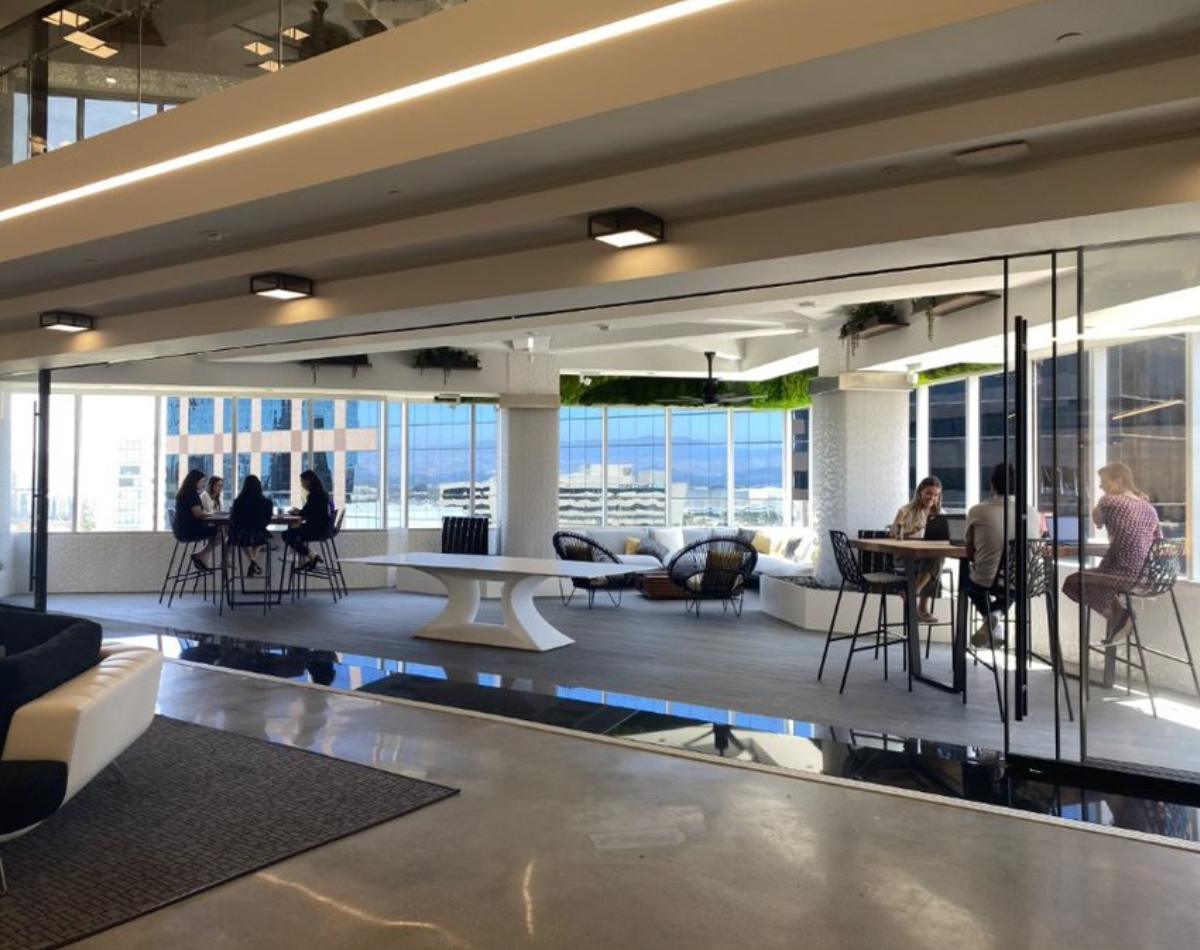 Indoor-outdoor connectivity has become an increasingly commonplace amenity for local office properties in the wake of the pandemic, and has prompted a shift in tenant demand for low- or mid-rise offices in lieu of towers.

One local law firm took that concept up a few levels: it brought the outdoors to the eighth and ninth floors of a prominent office tower near John Wayne Airport, after one of the more unique tenant-improvement projects seen of late.

It’s an expansion in space for the real estate law firm, which relocated from a 43,000-square-foot space elsewhere in the same Irvine Concourse campus.

“We wanted to create a new space that made employees excited to come to the office,” Partner Drew Emmel told the Business Journal during a tour of the new office, where employees gathered around tables from the new balcony, which juts out from the eighth floor, overlooking Centerview’s courtyard.

“The employees really inspired the design.”

The indoor-outdoor balcony is a rarity for Orange County high-rise offices, according to JLL Managing Director Kevin Bender. It required signoff from the building’s owner, Irvine-based Emmes Realty Services, and other nearby landlords.

“There are some examples of an outdoor space like this in Los Angeles, but not locally,” Bender said. “Other area landlords have called to ask if they can come see it.”

JLL represented Allen Matkins in its 2021 lease deal at Centerview.

The nearest comparison to the project is seen at Irvine’s Boardwalk office campus, the last big office complex to be built near John Wayne Airport.

Boardwalk’s design features several interconnecting indoor and outdoor bridges between upper floors at the two-building, 545,000-square-foot property. Among the most prominent tenants at that nine-story complex, which opened in 2017, is fellow law firm Rutan & Tucker LLP, which counts about 265 local workers.

The outdoor terrace and other features at the new Irvine office have helped bring back more employees than Allen Matkins originally anticipated, with 86 people working out of the space.
“It’s even brought in attorneys from our other offices,” Emmel said.

Among the more unique features in the office are subtle scent dispensers designed to have a calming effect; living green walls; a Zen garden; water features for white noise effects; and renovated private offices with plenty of natural lighting.

Breakfast and lunch are brought in several times a week from the new restaurant tenants at Centerview, including Kit Coffee on the ground floor of 2010 Main and the newest Sol Mexican Cocina location, which is run by Cypress-based Xperience Restaurant Group Inc.
The 625,000-square-foot office and retail complex has undergone extensive renovations and upgrades since Emmes bought the property in 2017.

Sol is the third restaurant to open at Centerview since the start of the pandemic, with four additional eateries set to open along Main Street at Eighteen Main, a 17,000-square-foot redeveloped restaurant pad at the former site of McCormick & Schmick’s.

The yet-to-open eateries include The Goldfinch, a sister restaurant to The 908 in Long Beach; The Trough, a sandwich shop concept from The Blind Pig in Rancho Santa Margarita; a sushi restaurant; and a new concept from the owners of San Diego French patisserie, Madeleine Café & Bakery.

The office expansion—a rarity for larger law firms these days as many have looked to shed space—comes alongside internal growth for Allen Matkins, which has hired 10 new attorneys year-to-date.

The company, which counts clients across various types of real estate product-types, has noticed specific growth from the industrial and residential sector.

“Our new office is a reflection of our status as a preeminent real estate law firm in the county,” Emmel said.