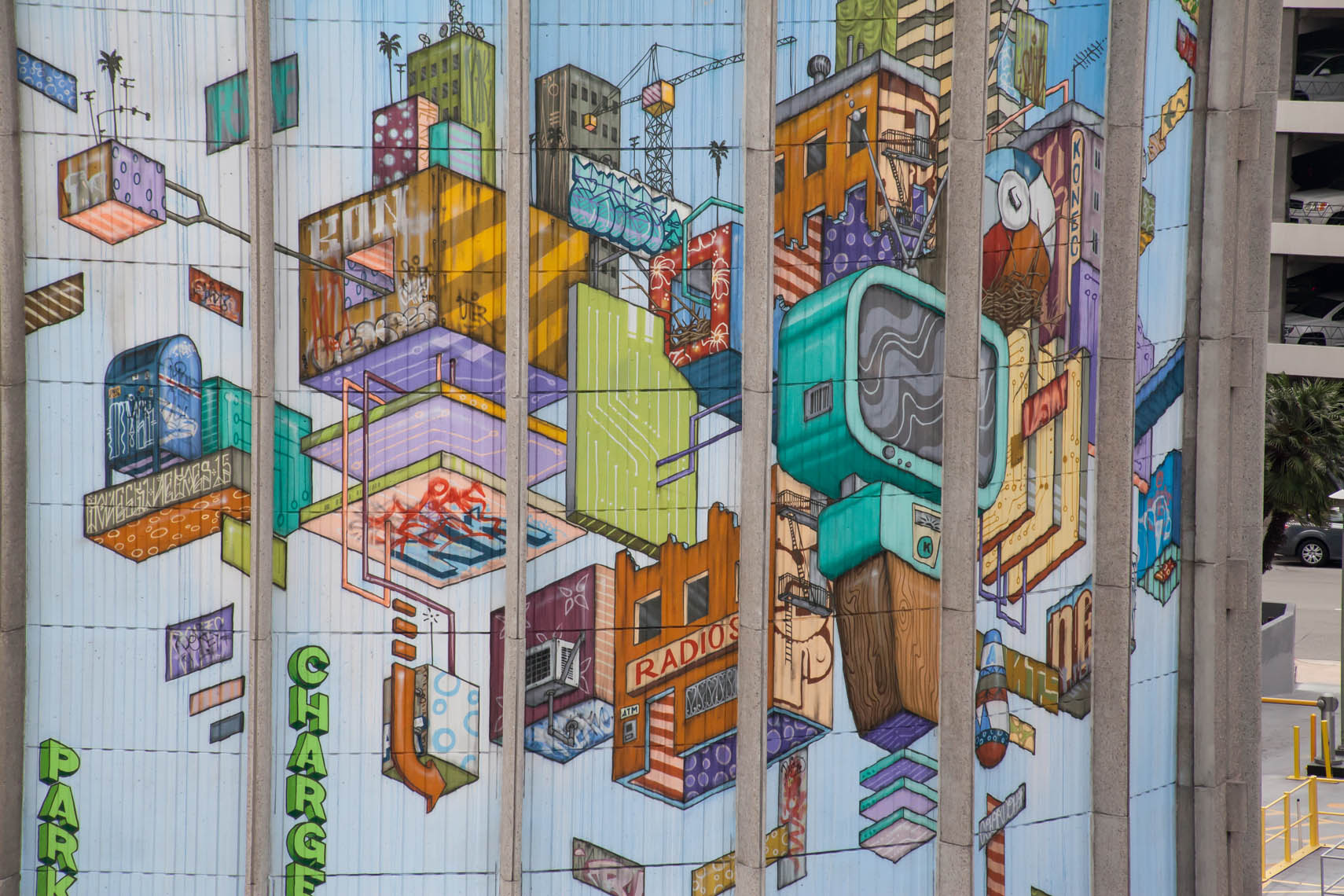 The 18-story office tower at 707 Broadway that opened in 1962 as a bank headquarters is morphing into a techno-hub.

The new owners, EMMES Realty Services, which bought the building two years ago for $34.6 million, are spending $3 million in improvements. They include such millennial-attracting amenities as a basement game room and fitness center, a ground floor with a souped up patio and lobby, a trendy sandwich shop, 30 electric vehicle charging stations and bike storage space in the garage. A Chase bank branch remains in business.

But for passersby the big change is a series of future technology-themed murals by local artist Christopher Konecki that signal the shift in direction for what was originally called Home Tower — “a fine example for a financial center,” as one of the speakers said at the grand opening 54 years ago.

“We wanted something that mirrors the exciting things that are happening in East Village,” said EMMES Vice President Jordan Johnson. “The urban transformation really resonates more with innovation-based firms.”

Konecki, 29, who has curated art projects in the Makers Quarter section of East Village, said he wanted to include allusions to technology of the past — such as a TV, radio shop and phonograph — and possibilities in the future, such as replaceable limbs and borderless communications.

“I’m asking the question, what does it really mean to be human,” the Golden Hill resident said.

Covering 9,300 square feet on three sides of the building’s garage, the $35,000 mural project is expected to last for about 20 years. It consists of:

▪ “Connected,” 5,610 square feet on the north side of the rotunda between Seventh and Eighth Avenues. A section of the San Diego-Coronado Bridge symbolizes connectivity between people, Konecki said. “The idea is that the whole cityscape is floating and not really dependent on physical locations.” 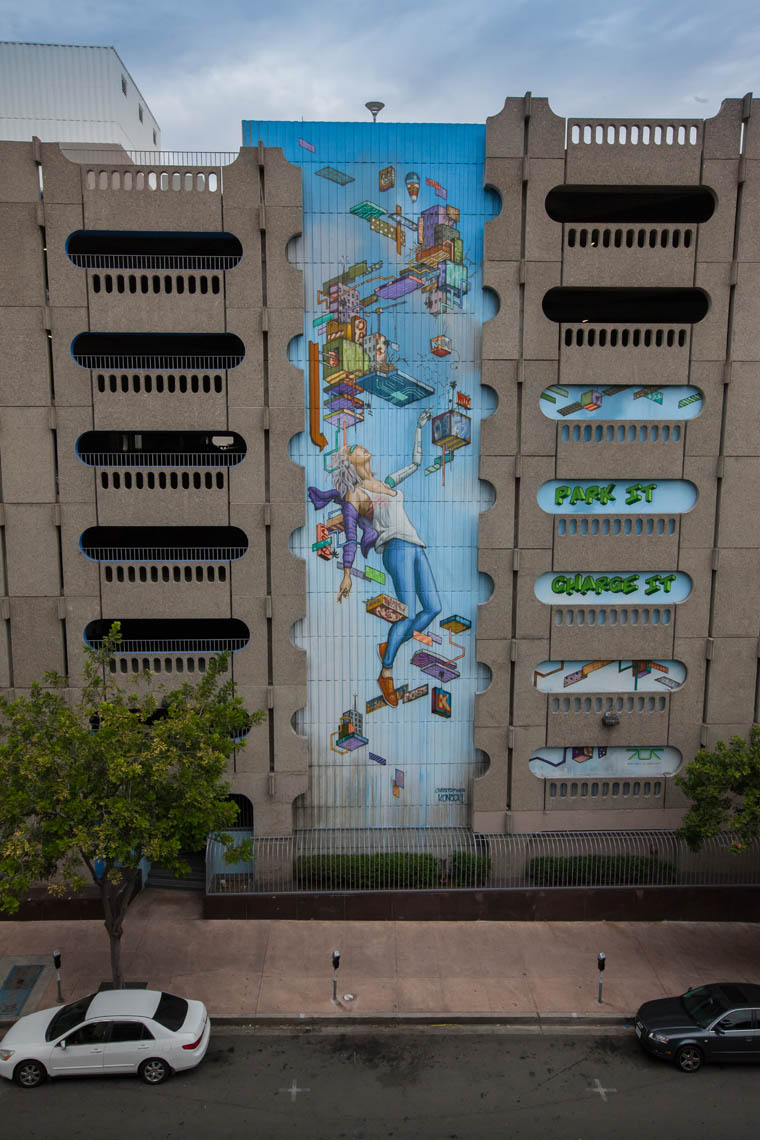 ▪ “Unveiling,” 1,875 square feet on the Seventh Avenue side of the garage, where a female figure’s robotic arm reaches into space, just as Michelangelo’s “Creation of Adam” at the Sistine Chapel reaches out to God, Konecki said. But in this case, the figure is reaching out to the possibilities of technology. 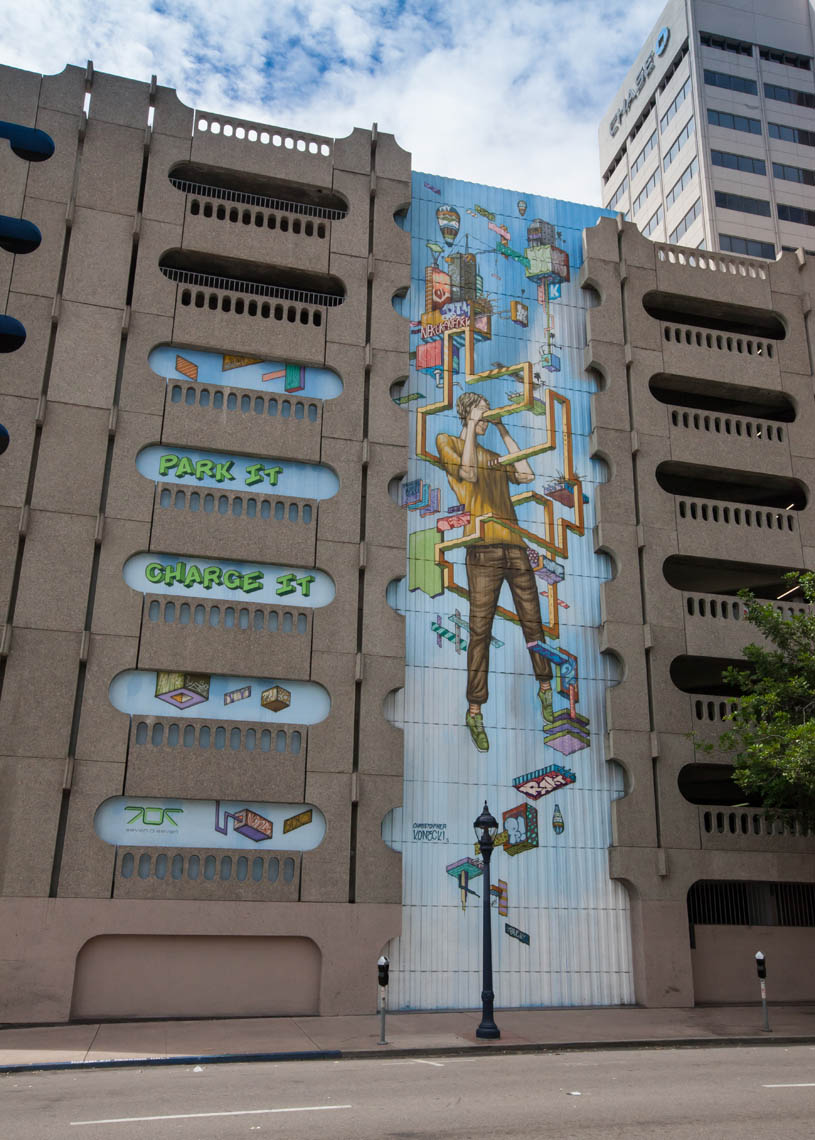 ▪ “Age Old Question,” also 1,875 square feet, on the Eighth Avenue side. The male figure looks through a periscope as if he is looking inside himself for the meaning of life.

In a further effort to rebrand the building, a giant “707” and “Seven 0 Seven” appear at the top of the building with a supergraphic diamond pattern spilling down the side. LED lighting bathes the building in changeable colors at night. In response to last month’s December terrorist attacks in Paris, EMMES ordered up a red, white and blue lighting homage to the French flag.

In other older cities, tech companies set up shop in “cool” brick-and-timber buildings. But San Diego has relatively few such structures, leaving building owners to attract the companies through other means.

According to Cushman & Wakefield leasing agent Steve Center, the 707 building is getting tenant attention for its physical transformation, its dog-friendly policy and a tenant improvement package that accommodates open-beam-ceiling concepts, as well as the new amenities. Adding exterior murals can remove the “sterile” feeling of modern high-rises.

“These companies are forward looking in nature and they see the future and want to get in early,” Center said.

The building is currently 64 percent occupied and the posted asking rents average $2.31 per square foot per month, up from the sub-$2 level previously, according to the CoStar Group’s building analysis.

One tech company that is sold on 707 Broadway is CPC Strategy, an 8-year-old digital marketing company whose 52 employees are set to move from Mission Valley at the end of March.

“The reality is that to attract a workforce in their early career and mid-career, downtown has a lot more amenities in the ease of transportation, food options — it’s a lot more vibrant than Mission Valley,” said Nii Ahene, chief operating officer.

He said 707 Broadway appealed because it was at the edge of East Village and the Gaslamp Quarter and had large column-free, 9,200-square-foot floorplates that suit CPC’s open-office, collaborative workplace philosophy. The new features represented a “pleasant surprise” and the company signed a lease that was comparable to other Mission Valley rates except for parking. But the company is subsidizing its employees’ parking charges.

“It was an economic decision like everything else,” he said.

As for concerns about homeless encampments at the nearby post office and nearby former Central Library, Ahene said about 20 percent of staff already lives downtown and the remainder are familiar with the problem.

“If you’re in an urban area, you have to deal with it and the hope is (downtown leaders) can find creative solutions to address that over the next couple of years,” he said.